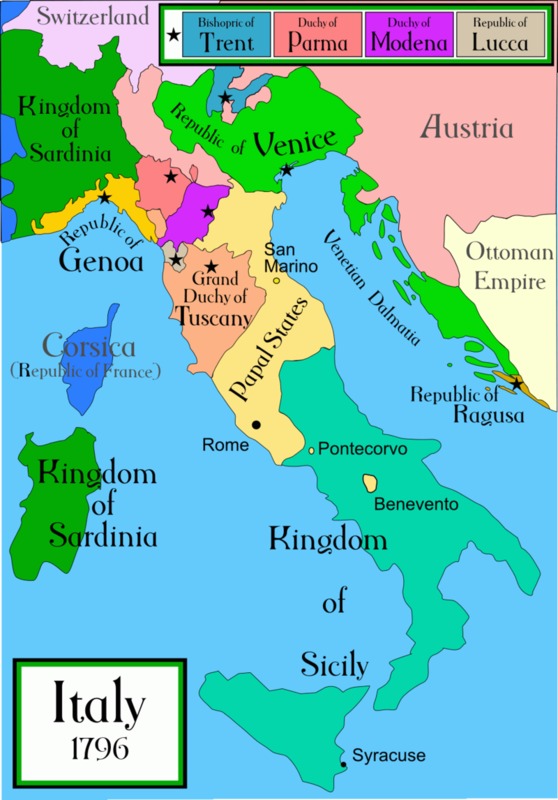 Besides from the excitement during the turn of the 19th century, 18th century Italy received the Duchy of Savoy as a result of the Treaty of Utrecht (1713). The War of the Spanish Succession (1700) resulted from Charles II of Spain dying, without a direct heir. The war was between Louis XIV of France and a couple allies versus Austria, The Holy Roman Empire, the Dutch Republic, Spain, Britain, and Savoy. Naples, Sicily, Lombardy and Sardinia were up for grabs during this time period. During the first phases of the war Savoy sided with France, but then switched loyalties to Spain. The Duke of Savoy had fragile ties with France, as he was married to Louis XIV’s niece. As a result Savoy was attacked by France, only to be barely saved by the Duke’s cousin. By the end of war, when land was carved up for the victors, Savoy was given Sicily, which gave the duke the title of King. About five years later he traded Sicily for Sardinia and made it a kingdom in order to keep his title. Naples and Sicily were given to the Spanish as a result of the War of the Polish Succession (1735).1

18th-century Italy was also marked by outbreaks of smallpox, noted in cities such as Milan, Verona and Bologna between 1710s and 1730s. Children had very little luck in recovering while adults had a slight chance at surviving with disfiguration. By the late 18th century, Livorno and Porto Ferraro were well known for their smallpox outbreaks, which was the cause of their 10% death rate.2 18th Century Italians also suffered from fevers, syphilis, tuberculosis, malaria, cholera, and dysentery as a result of unclean bedding and an overall lack of hygiene. Famines and droughts also led to death by starvation. Particularly in the Kingdom of Naples, Tuscany, and Rome during 1709-10 and 1764-7. The amount of sick and dying was apparent event to those who visited as tourists.3

By 1700, Italy had a population of about 13 million.4 It had 45 major cities, with Latin as the language of only the rich and educated. The 18th century saw new innovations as the country tried to move from feudalism to “risorgimento," or revival.5 Nevertheless, many Grand Tourists remarked on infrastructural deficiencies, particularly in cities beyond Rome and Venice. The combination of wars and diseases had not been kind to urban life in some cities.

Rome became an extension of the Napoleonic Empire in 1799. The reigning Pope was exiled to live in France and died there, but the Papal States were soon restored the year after, in 1800, by Pope Pius VII. The Senate at the time was composed of Senators who were representatives of each political party. They reviewed legislation that came from the “lower house”.