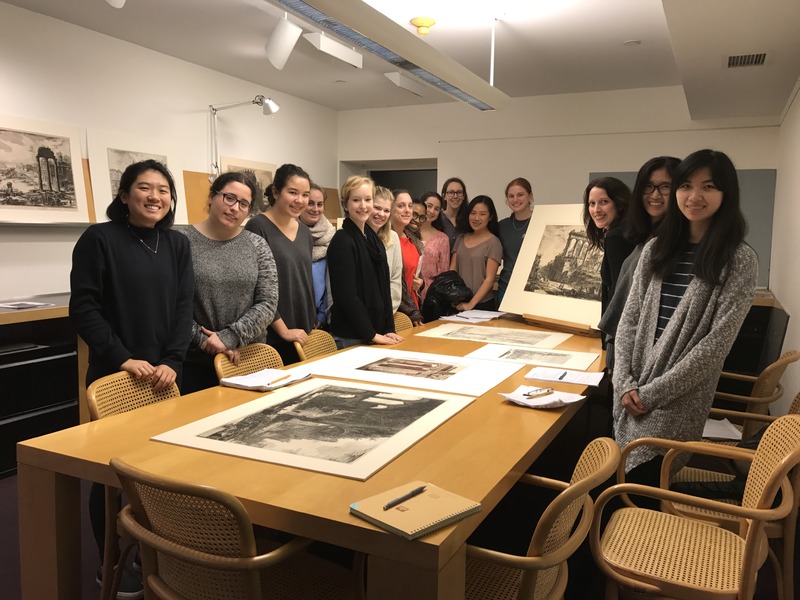 ARTH 343 with Piranesi etchings in the Davis Museum

Austen Aquino is a member of the Class of 2017 from Chicago who is double majoring in Comparative Literature and Classical Civilizations. Her love affair with everything ancient Rome began in high school and has been growing exponentially ever since. She is an avid lover of everything Roman, everything book-related, and anything to do with dogs.

Hannah Augst is a senior at Wellesley College majoring in art history. Though a majority of her coursework has focused on Italian art of the thirteenth through seventeenth centuries, she also enjoys studying ancient Roman art and architecture. Hannah works in the Curatorial Department at Wellesley’s Davis Museum, and will pursue a career in academia.

Zoe W. Borghard, Class of 2018, is majoring in Biology at Wellesley College. She hopes to work with animals and is pursuing the pre-vet track. She also has an interest in all things Classical, which has led her to become secretary of Classics Club and to take many classes on the subject.

Kimberly Cassibry, Assistant Professor of Art, specializes in the art and architecture of the ancient Mediterranean.

Catie DiElsi, Wellesley College Class of 2017, studies Classical Civilization, Psychology, and Education. She is fascinated by how the Romans understood their own history, particularly through literature. Catie plans to pursue a career in education.

Gracey C. Hellstrom is a junior, from Minneapolis, Minnesota, studying Classical Civilizations and Economics. She enjoys bagels, podcasts and all things ancient. She can rarely be found on campus without a coffee cup in hand.

Emma Hevey is a senior at Wellesley College in Massachusetts studying Psychology and Classical Civilization. She has a particular interest in Latin Literature and Roman civilization. Her other areas of study include clinical psychology and French language and literature.

Margaret Justus, a native of Little Rock, Arkansas, is a member of the Green Class of 2017. She is Art History and Classical Civilizations major, with a focus on the Roman world. She has been an active member of the Davis Museum Student Advisory Committee since her first year at Wellesley. Her favorite dining hall dessert is the vegan “Angel Cookie.”

Michelle H. Lee ’17 is from Irvine, California, double majoring in English and Art History. Aside from pursuing her academic interests, she enjoys watching classic films, drawing, and exploring new restaurants in Boston with friends. After graduating Wellesley, she plans to move to New York and eventually attend law school.

Sheree Y. Liu '17 is a Computer Science and Art History major. She hails from Central New Jersey and is fond of bagels and pizza. Outside of school Sheree is an avid ultimate frisbee player and enjoys scenic runs around Lake Waban.

Somé M. Louis is a current senior at Wellesley College, and hails from Charlottesville, Virginia. She is a Studio Art and Art History double major with interests in printmaking, painting, and contemporary art. Somé especially enjoys visual analysis and learning inside information on the life of artists and their subjects.

Yiwei Qi is a senior at Wellesley College with a major in Economics and minor in Art History. She is from Shanghai, China. She worked as a student guide at Davis Museum for two years, and she is an active member on Wellesley Wushu, a Chinese martial arts performance group.

Becky Rudolph is a member of the class of 2019, originally from Glastonbury, Connecticut. She is majoring in the Classics, and holds particular interest in the history and literature surrounding the end of the Roman Republic and the beginning of the Roman Empire. Outside of classes, she rows, hikes, and plays rugby.

Clare Sachsse '18 is interested in issues of place—specifically, how people work within and for specific bioregions. A proud Vermonter, Clare has previously worked at an environmental nonprofit in Portland, Oregon, and is thrilled to be a Davis Scholar and Environmental Studies major at Wellesley.

Julissa M. Sarmiento is part of the class of 2017.  She is a double major in physics and classical civilizations.  She is from Hialeah, Fl, located near Miami.  She plans on going to graduate school to pursue a Ph.D. in astrophysics.

Jelena Zhang was born and raised in Beijing, China and attended Mercersburg Academy in Pennsylvania. She is now studying at Wellesley College double majoring in Art History and Economics.