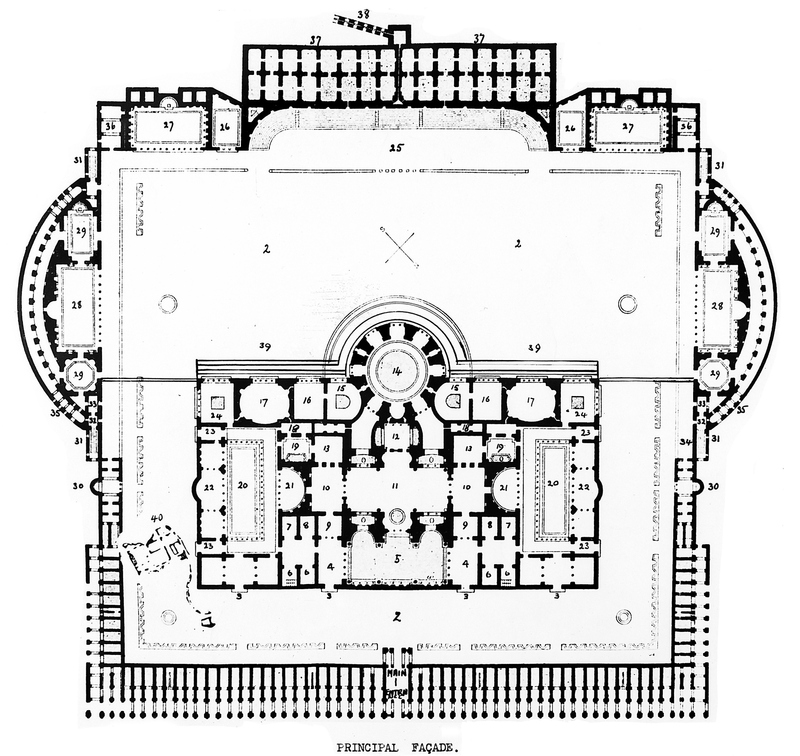 Layout of the Baths of Caracalla

Bathing was an important part of daily life in ancient Rome.  It was considered important not just for health reasons, but also as a form of leisure and relaxation.  The morning would usually be spent doing business, and then around 2/3 PM people would head to the baths to relax until suppertime.1  Bathing during the daylight hours was preferred; to such extent, that there were sometimes laws to close public baths after sunset.  Most bathhouses either had incredibly cheap entrance fees or were completely free, allowing even the poorest Romans to be able to enjoy the luxurious baths.  By the 4th century CE, there were 856 baths and 10/11 thermae, which are larger and luxurious baths, like the Baths of Caracalla (also known as the Thermae Antoninianae) and the Baths of Diocletian.2  Baths allowed members of all social and monetary classes to come together in a common space.  There were often noisy places, filled with lots of conversation.

In the baths, the first place a visitor would go to was the apodyterium, which was the undressing room.  They usually had benches, cabinets, cubbies, and hooks where visitors would store their “street clothes.”3  As one could imagine, the theft of clothes was a common issue in baths, so the rich usually brought along a slave specifically for the purpose of guarding their clothes while they bathed.  After undressing, visitors could then choose from a variety of activities and rooms.  Of course, there was no particular order in which a visitor had to go through the baths; however, many visitors did a little bit of modest exercise before bathing.  Depending on the size of the baths, visitors could choose to exercise indoors or outdoors.  Outdoor exercise spaces were usually surrounded by columns and were called palastrae; the Baths of Caracalla had two, both labeled 20 in the layout above.  The exercise was usually light, like playing ball games, and both men and women participated.  Recreational swimming was also considered a suitable exercise.

After exercising, a visitor could choose to visit a variety of rooms.  Many baths had rooms for visitors to get massages with warm oil, either by paying a bath slave to do it or by bringing in their own slave.  Then there were a variety of different bathing rooms a visitor could choose from.  There is the frigidarium, which is the cold room.  They were unheated rooms with unheated water.  These were some of the larger and luxurious rooms as cold rooms were some of the more popular rooms.  In the layout of the Baths of Caracalla above, the frigidarium is labeled 11.  Next to the frigidarium was the tepidarium, which was the warm room.  The room and its waters were heated more than the cold room and the room was also usually smaller.  It is labeled 12 above in the Baths of Caracalla layout.  Next to the tepidarium, was the caldarium, or the hot room.  This room and its waters were heated to much higher temperatures.  They also had large windows to let the sun naturally heat the room as well.  These were also very popular rooms and were very large and lavishly decorated.  It is labeled 14 above in the layout.  It is believed that the dome of the caldarium had large windows in it to further let in the light.  It is also believed that the caldarium served as a model for the Basilica of Maxentius and Constantine.4 In addition to the bathing rooms, there were also two different types of steam rooms.  There was the laconium, which was a dry heat room, and the sudatorium, which consisted of a wetter, steamier heat.  Additionally, some baths had large open-air swimming pools, called natatio, which is labeled 5 in the layout.  Some of the larger baths also had heliocaminus, which were special sunrooms where visitors could sunbathe.

The baths served other functions such as allowing for performances and traveling shows to entertain the bathers.  People also would often eat in the baths.  They could either purchase food at stalls right outside the baths or at shops and stalls that were located in the baths themselves.  The outer structure of the Baths of Caracalla likely housed some shops, some of which probably sold food to the hungry visitors.  In fact, there was a mill that was powered from the runoff of the baths for making grain into flour, probably to make bread for the visitors.5  The larger baths sometimes had libraries, meeting rooms, laundries, sun terraces, and/or elaborate gardens (most likely in the area labeled 29 above).  The rooms labeled 26 are believed to be libraries.  The Baths of Caracalla even had stadium-like seating built into the outer structure for viewing athletics.  In the layout of the Baths of Caracalla, the portion labeled 25 has the seating.