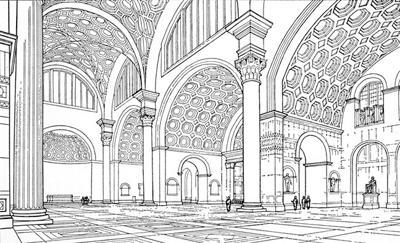 The Basilica of Maxentius and  Constantine, the greatest of the Roman basilicas, covered about 7,000 square yards (5,600 square m) and included a central nave that was 265 feet (80 m) long and 83 feet (25 m) wide.1 Only about a third of the original structure still stands.  The vaulted roofs and concrete materials caused the Basilica to more closely resemble a traditional Roman bath than a basilica. There is evidence that the basilica not only had the intricately carved ceilings as seen on the remaining pieces, but that the ceilings were covered in purple marble, and red and gold paint has been discovered on the floor.2 The design of the basilica has served as an inspiration for many other buildings, most notably the old Penn Station in New York City.