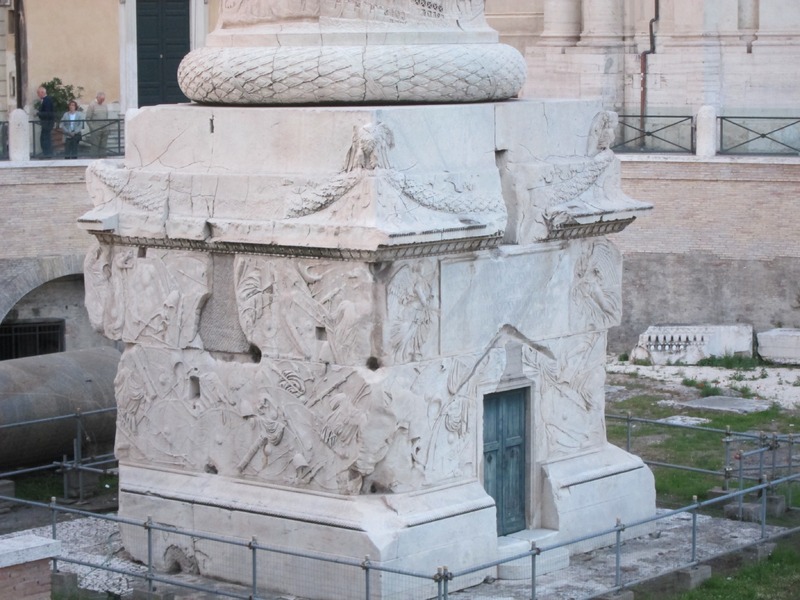 Base of Trajan's Column

Besides serving honorific functions, Trajan’s Column has also been a funerary monument since its creation. Standing 6.155m high, the pedestal is made of eight marble blocks in four courses1. The reliefs that depict spoils of war complement the triumphal frieze spiraling the column above, but the style and internal structure of the base define the funerary aspect of the monument. Modeled after a Roman funerary altar, the base features an inscription panel above the door and eagles on the corner acroteria2. The eagles symbolize the most important step in Trajan’s funeral—apotheosis. The base is highly visible because of its low placement compared to the soaring column, reminding passersby of the emperor’s status in his afterlife.

Inside the base is a small chamber that’s long been believed to be Trajan’s tomb. Ancient writers and historians describe this chamber as the place where Trajan’s ashes, stored in a golden urn, were deposited. Amanda Claridge raises the concern that this chamber is too small to be an imperial burial. She believes that Trajan’s tomb must have been a separate installation outside the column3.

Trajan’s statue that originally stood atop the column was associated with triumphal as well as funerary meanings. Standing closer to the sky than any other structures at the time, the statue implies Trajan’s deification after his death.