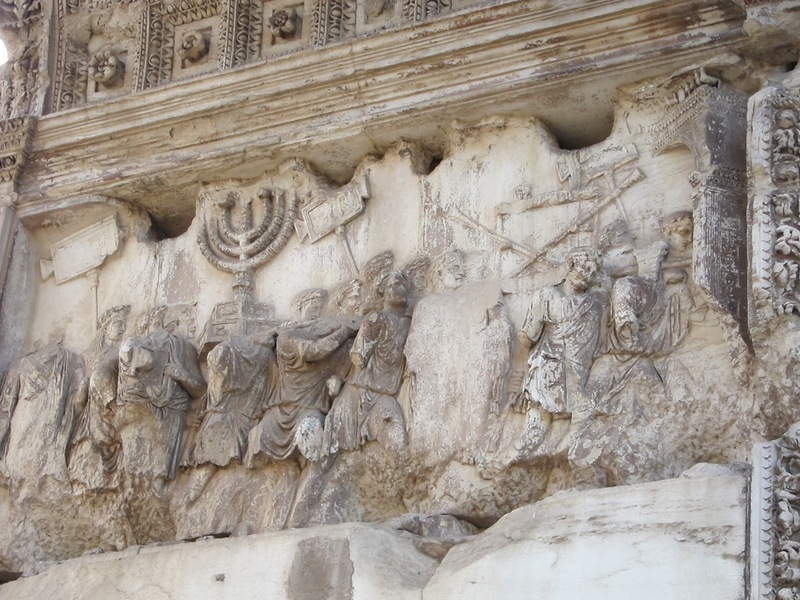 An interior panel of the Arch for Titus is laden with iconography signifying Titus’ victory in Judaea. The high relief carving reveals Roman figures carrying war spolia (spoils) in a triumphal procession. As indicated by their unified 3/4 profiles and onward march, they head in the direction of an arch monument, perhaps one of the other arches dedicated to members of the Flavian dynasty or to Rome's Porta Triumphalis (Triumphal Gate), which they must pass to reach their final destination on Capitoline Hill. This arch monument, near the edge of the relief, bears a typical statue group (represented in reduced scale) and clearly marks the trimphal path.

Long trumpets point forward and various objects are paraded, but most noticeably, an enormous Menorah captures our gaze. On this relief, the Menorah, a symbol of Judaism, claims an additional meaning in this context: the siege of the Temple of Jerusalem. The central placement and sheer size of the Menorah effectively convey both Titus’ triumph and the identity of the conquered city. Even further, recent research by Yeshiva University has found evidence that the Menorah was originally painted gold; this would have heightened the spectacle of both the triumphal parade and the celebration of Titus.