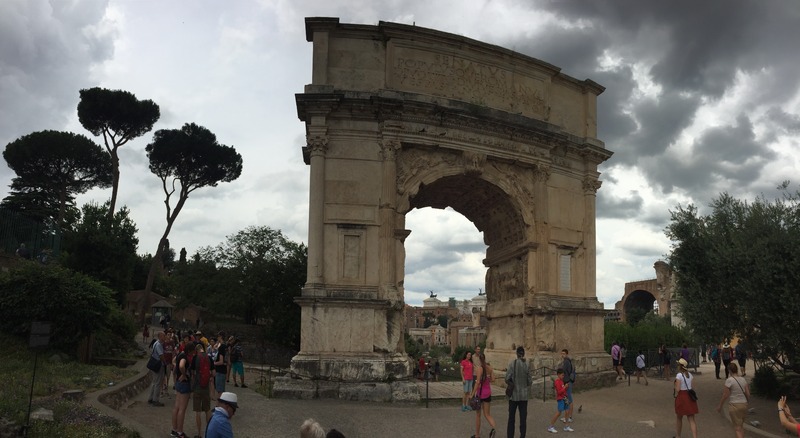 Arch of Titus, view with basilica.

Even though the Arch for Titus is static, its triumphal experience is rather dynamic. Diane Favro’s study (2014) emphasizes the importance of movement in ancient Rome, where mobility was  associated with mental activity and even strategies for remembering. The triumphal procession was tied to the collective identity of the state; its circular path connected the past with the present. Prior to departure for war, the general would pray in the Temple of Jupiter Best and Greatest on the Capitoline Hill for victory. After victory, the troop returned to Rome, processed from the Circus Flaminius area, circumambulated the city, and arrived back at the Temple of Jupiter with tribute. Each triumphator could design a different route in order to pass by and create connections with different buildings. These phenomena help us understand how a triumph could impact the significance of an arch on its path, and how an arch could impact the significance of a triumph.

Naomi J. Norman, in turn, argues that an imperial triumph, a procession celebrating great military victory such as the one commemorated by the Arch of Titus, began the symbolic cycle that culminated in the triumphator’s posthumous apotheosis, his ascension to divinity. An imperial funerary procession roughly reversed the route of a triumph, and shared many notable features (such as likenesses of conquests, the emperor’s attire, the city gate by which a triumph entered and an imperial funeral exited, and the location on the Campus Martius where a triumph began and a funeral ended). Specifically on the Arch for Titus, the small panel near the top of the inner arch depicts Titus in the process of apotheosis. He wears the same attire as he does in the larger relief depicting him mid-triumph, the image is bedecked with similar garlands, and he rides to heaven on an eagle similar to the one on his triumphing chariot. This panel closely links Titus’ triumph with Titus’ apotheosis.1