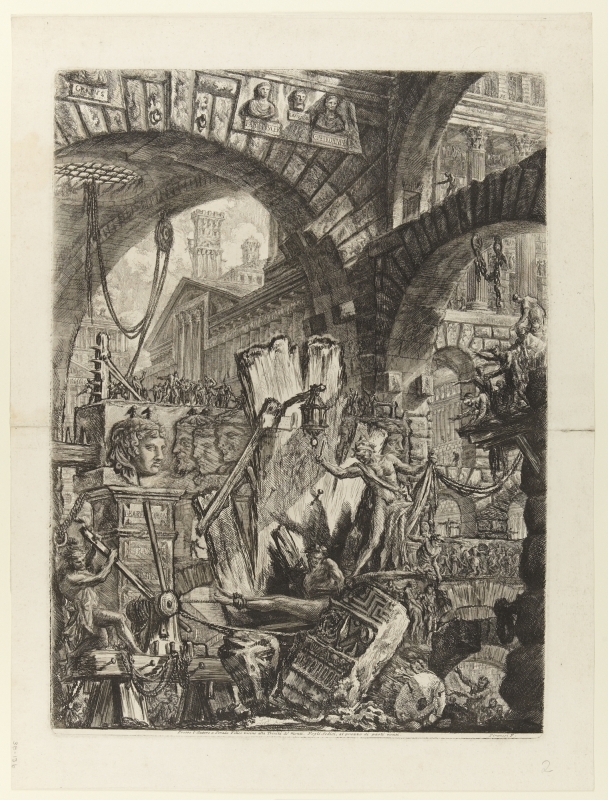 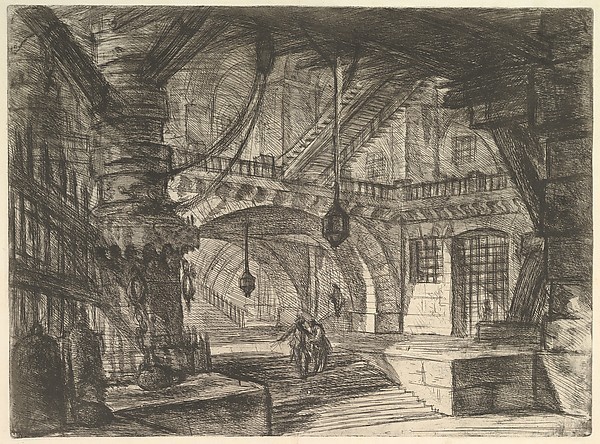 Piranesi created the series of convoluted prison interiors, I Carceri, after being influenced by his upbringing in the printmaking scene in Venice. In I Carceri, Piranesi explored the possibilities of perspective and spatial illusion while pushing the medium of etching to its limits.14 These pieces represented unrealistic architectural structures that have little to do with actual prisons. The Man on the Rack and The Pier with Chains, representative examples of I Carceri, both contain large cavities of space and gigantic pillars, buttresses, walls, and arches. In both pieces, there is a sense of cluttered and claustrophobic space, endlessly extending structures, and impossible structures. In I Carceri, Piranesi never presents an entire building, nor does he ever give enough information to distinguish the complete form of the structures, as in The Pier with Chains. Piranesi betrays the rules of perspective and even hides important elements of the architecture itself when his etched lines fade into the edges of the paper. I Carceri allowed Piranesi an experimental outlet with which he ventured into his interests of scale and monumentality.15 The second edition of I Carceri was inspired by his obsession with archaeology and antiquity and was influenced by the impressions he gathered in Rome. Piranesi’s dabbling in stage design must have also been an influence in the invention of I Carceri, as the fantasy and narrative of such architecture is omnipresent. No other prints by Piranesi force the eye to move so deeply inward and upward.16 In these prints, Piranesi demonstrated an investment in a unique visual experience for the viewer, evidenced by the tug of war between light and shadow. The images presented by these plates would have been deeply haunting to his audience as an expression of the sublime, a style founded in the emotion of terror which was becoming fashionable in the art world.  For example, in Italy, a popular representation of the sublime involved depictions of Mount Vesuvius erupting, a terrific and devastating event. The prisons of I Carceri stand out as one of his major achievements.17