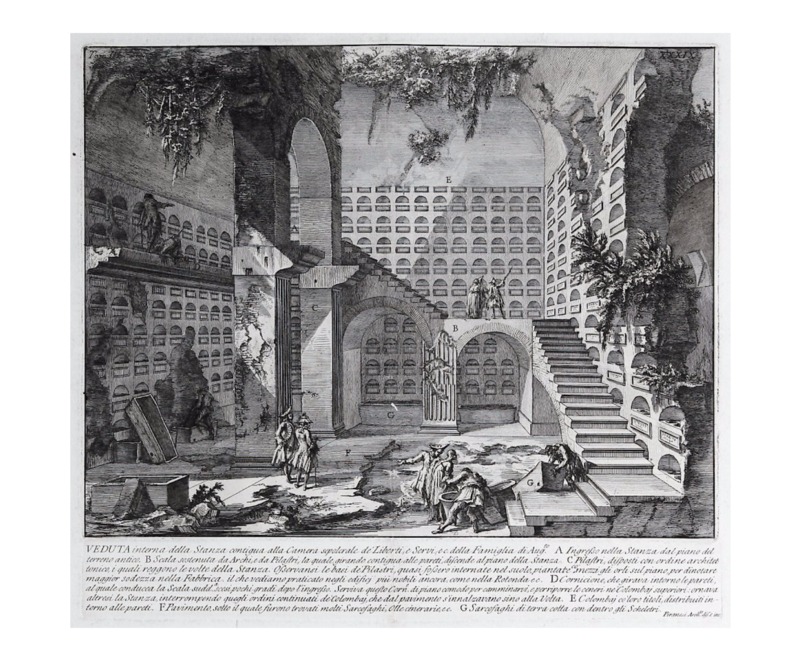 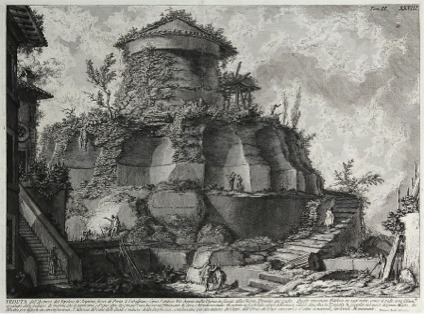 Piranesi spent his first few years in Rome measuring and sketching ancient architectural sites. The results of Piranesi’s comprehensive research were presented in the four volumes of the Antichità Romane (1756). This production rapidly earned Piranesi an international reputation, as evidenced by his election to the Honorary Fellowship of the Society of Antiquaries of London a year later. Antichità Romane itself set out to provide a sweeping overview of the archaeological information on Ancient Rome Piranesi gathered over the years. Its purpose was the education of contemporary designers and their patrons. The more than 250 images feature original methods of illustration, combining an impressive amount of data and skilled etchings into a single plate. As depicted in the views of the burial chamber and tomb, Piranesi balances the picturesque appearance of Roman architecture with detailed explanatory text in one plate. Piranesi’s expansive topographical knowledge of Rome allowed him to place the many diverse and isolated ancient remains into the broader context of Rome’s new urban development. 21 The Antichità Romane represented a milestone in the history of classical archaeology, a newly established area of study for historians. Classical archaeology became popular, or valued, after the discovery of Pompeii and Herculaneum, sites that piqued the interest of many intellectuals and aristocrats. Besides representing a massive advance in the how archaeological discoveries were communicated to the broader public, the Antichità Romane focused attention in a visually stunning way to neglected aspects of antiquity, such as the techniques of Roman building science and non-traditional Roman decoration. The Antichità Romane was set apart from the work of Piranesi’s peers due to the greater spectrum of buildings he included in the work and by the way he placed them within landscape settings, often with the addition of figures. The figures within Piranesi’s etchings often hint towards the sublime, an art style defined by the seemingly overwhelming terror of nature looming over mankind. In the early 18th century, nature was determined to be a devastating force that needed to be controlled; control over nature represented the control one had over man. The sublime was introduced as philosophers and intellectuals from France and Britain came to see that the overwhelming powers of nature were, in a way, beautiful, because of the pure terror and emotion it incited in viewers. Piranesi’s miniscule figures and grand, vast structures represent the relationship people of the 18th century believed they had with nature and ancient ruins. The Antichità Romane, and his sublime images of ruins, allowed Piranesi to make a name for himself as an antiquarian.22