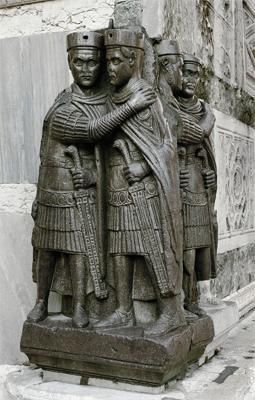 The Tetrarchy was established in 293 CE by the Emperor Diocletian.  It consisted of four different rulers, two head emperors (originally Diocletain and Maximian) and two junior emperors (originally Constantius and Galerius). These four Emperors spit the empire into four districts and each ruled separately.  The goal of this new system was to ease the succession process, after a series of  problematic successions in the 3rd century.  This sectioning off of the empire significantly changed the tax system, and made each section relatively self sufficient, a development that would make fragmentation possible later in the future. While this form of government was meant to endure, a series of civil wars broke out among the tetrarchs in the 4th century, eventually ending with Constantine as the sole ruler.

Maxentius and Constantine →
The Tetrarchy