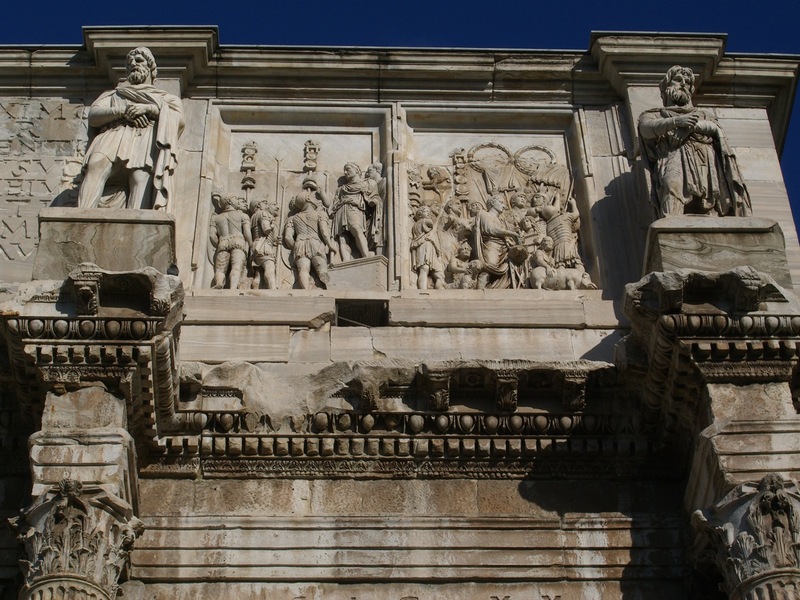 The spolia incorporated throughout the Arch for Constantine include fragments from a monument for Marcus Aurelius. It is possible that this monument was a triumphal arch. These spolia are relief panels located on the attic. The south side panels are scenes of the emperor conducting his war-related duties. The relief furthest to the left shows the emperor welcoming an allied king. To the right of that is a relief showing an adlocutio, or the emperor addressing his troops before battle, while the next panel depicts the emperor performing a sacrifice before battle. The final relief on the south face depicts two barbarian captives being brought before the emperor. The north side reliefs depict the emperor engaging in his civic duties. The leftmost panel shows the return of the emperor, accompanied by the god of war and goddess of the city of Rome, from military campaign. Meanwhile, the second panel is a traditional depiction his departure off on campaign, accompanied by his soldiers and the personification of the Roman people. The third panel is one of liberalitas, or the emperor distributing funds to the Roman people, while the final panel shows a barbarian prisoner begging for mercy from the Emperor 1. These spolia were certainly chosen for their relationship to Marcus Aurelius who was considered a good ruler by the Roman public. Most importantly there is evidence that the heads of the emperor were recut in antiquity in order to depict Constantine, although the current heads date from a subsequent restoration 2. However, it is likely that the panels were also chosen to add stylistic diversity to the monument.