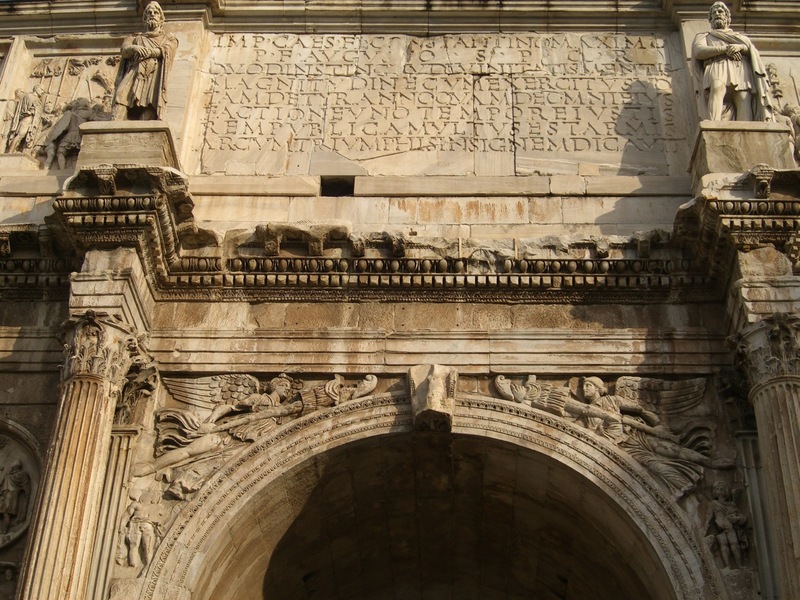 Arch for Constantine, detail of inscription.

The inscription on the Arch for Constantine specifies that the Senate dedicated this Arch to Constantine.1

For the Emperor Caesar Flavius Constantine the Greatest, pious blessed Augustus, because by inspiration of divinity, in greatness of his mind, from a tyrant on one side and from every faction of all on the other side at once, with his army he avenged the republic with just arms, the Senate and Roman People (SPQR) dedicated this arch as a sign for his triumphs.

The viewer’s attention is drawn to the letters “SPQR”, the Senate and People of Rome, because of the large spaces between the letters. Worthy of note are the words “rem publicam” or “republic”, rather than empire. Rome was clearly an empire at this point, but the author of this inscription, as well as many Romans, wished to preserve the idea of the Roman republic, often looked back on as a golden age of Rome. Furthermore, the inscription praises Constantine for “avenging the republic” from a “tyrant,” which held cultural significance for the Romans. The word “tyrant” makes it clear that Constantine defended Rome from an internal conflict, rather than from an external military campaign, as Septimius Severus did. The original Roman republic was precipitated by the overthrow of a tyrant.2 Positioning Constantine as an emperor who overthrew a tyrant gave him a quintessentially Roman achievement.