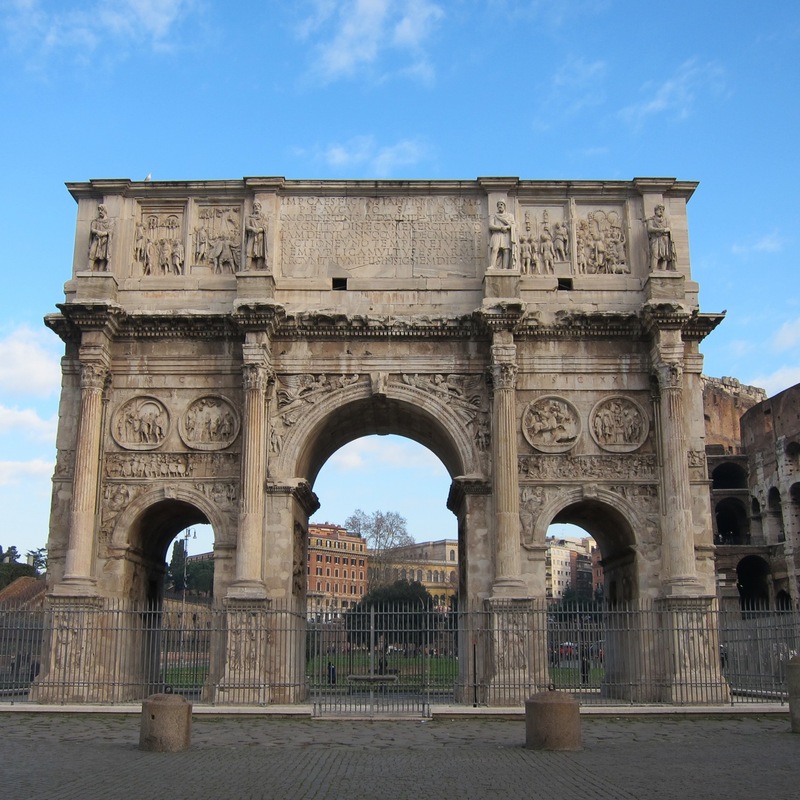 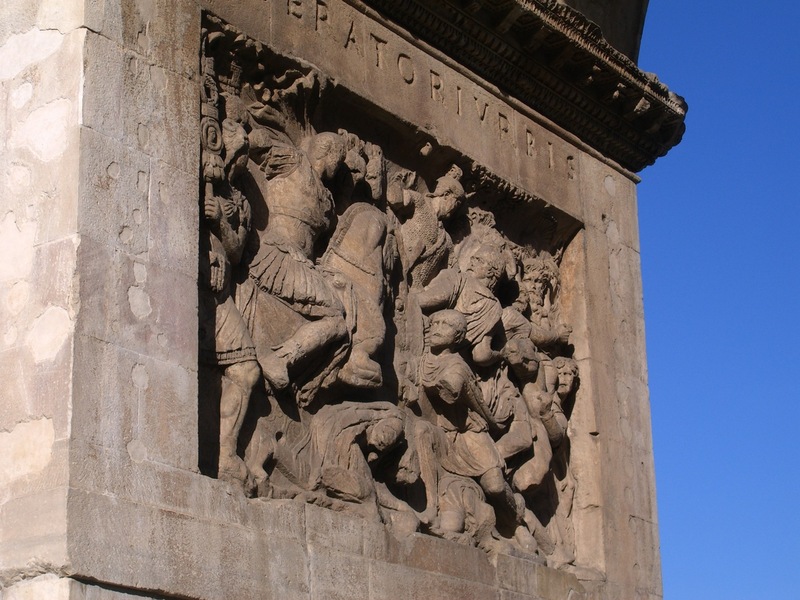 The spolia on the Arch for Constantine were taken pars pro toto, or part representing the whole, from previous monuments dedicated to emperors ranging from Marcus Aurelius to Hadrian.1 By referencing the triumphs and successes of past leaders, the monument's designer could evoke memories of them.  The Arch for Constantine incorporates two main elements that likely date back to Trajan: eight statues of Dacian prisoners and four panels of relief sculpture long thought to be from the "Great Trajanic frieze."

These earlier sculptures played an integral role in conveying the Arch for Constantine’s purpose. The captive Dacians likely derive from from Trajan’s Forum (where sculptures of Constantine were also added, perhaps in exchange).2 Now, the prisoners stand high on a cornice above the Corinthian columns. Their large scale and centrality indicate their significance, but most notably, make an obvious reference to Trajan’s victory in the Dacian Wars. Their realistically portrayed bodies stand in contrapposto (typical ancient Greek sculpture stance with one bent knee) with their hands bound together and heads lowered in defeat. By mounting such recognizable sculptures across the arch, the arch's designer connects past triumphs to the current emperor, simultaneously legitimizing both his and Rome’s power.

On the outer ends of the arch and in the inner passageway are segments of a once lengthier frieze depicting the emperor in heroic scenes of combat. In the passageway, the relief on the west side is crowded: figures trample over each other, running away from Trajan who charges into battle on horseback. The inscription above reads “Liberatori Urbis”, or “For the Liberator of the City”. The second relief shows a fusion of two scenes. The left half reveals Trajan standing between Roma and the goddess Victory, who prepares to crown him in a triumphal wreath. The other half depicts the Roman army subduing the Dacian enemies. Above, “Fundatori quietis” or “For the Founder of Peace,” labels the emperor visibly represented. Trajan’s face was re-carved to resemble Constantine's, and thus, also gave him the title.3

Both the Dacian sculptures and the battle friezes contributed to the symbolic and political motives of the Senate, Rome, and Constantine. The ambiguous references to both Trajan and Constantine blurred the attribution of accomplishments to a specific emperor and instead, made its viewers consider the bigger picture — Rome’s glory as a whole.

3 Jaś Elsner, From the Culture of Spolia to the Cult of Relics: The Arch of Constantine and the Genesis of Late Antique Forms (Papers of the British School at Rome 68, 2000), 165.