Which translates to "Emperor Caesar Vespasian Augustus ordered a new amphitheatre to be made from spoils". What is quite interesting about this inscription, however, is that it appears to have been slightly modified to read as:

The inclusion of one letter, "T", changes the meaning of the entire inscription, giving credit for the amphitheatre's construction to Titus, rather than to his father, who died before its completion. 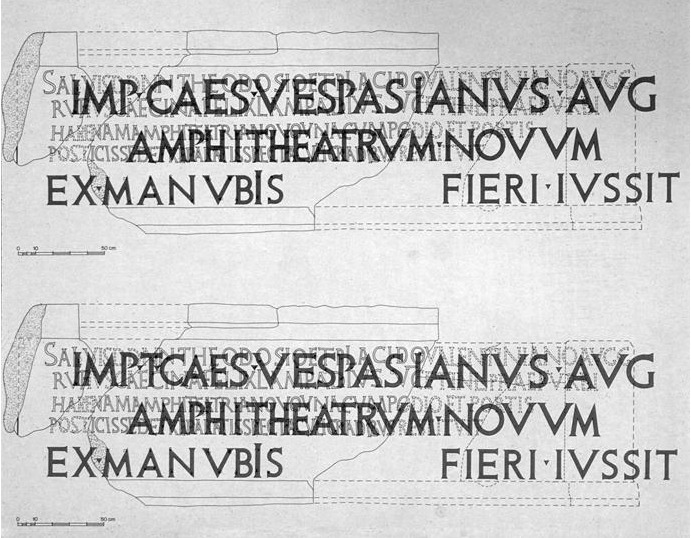 There were, however, other inscriptions on this same block of marble, dating much later. There are, in fact, several restoration inscriptions that can be found throughout the Colosseum. This includes an epigraph that ran "all the way around the amphitheatre" in a place highly visible for all spectators, commemorating restorations after Alaricus' sack of the city in 410 CE.4 There are also inscriptions recognizing the post-earthquake restorations of the Colosseum in the 5th century CE.

Aside from these commemorative inscriptions, many other inscriptions were practical, such as those which identified the various cavea (the stands) sections.5 These inscriptions could be quite specific, like the one that designates the exact seating section for the Fratres Arvales (a religious order) within the cavea.6 Social or professional groups would have a section delineated with an inscription, as would some individuals.7 Inscription, whether intentionally commemorative or not, allow modern archaeologists and historians a window into the social space of the Colosseum.