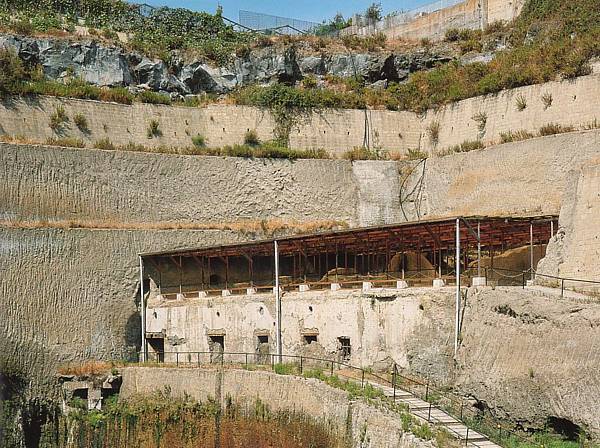 At the time of discovery in the 18th century, archaeology did not exist as a field of study; the accidental discoveries of Pompeii and Herculaneum propelled the development of this field. Parts of each site were ruined by original excavation in 1738 and prior, prompting visitors who came to Pompeii and Herculaneum on the Grand Tour to note its rather poor appearances. Although they were intrigued by the ancient monuments and objects, the majority of the people were dissatisfied by the methods. However, that would soon change as the experiences at Pompeii and Herculaneum instigated archaeological studies. The early excavations by Alcubierre were done with little thinking of the historical content he had just unearthed. Since no tools had yet been created in order to maximize the efficiency of the dig, he dug at what seemed to be the easiest access point to the artifact. relying on old wells and lines of masonry to dig.1 Furthermore, Alcubierre and his team would go into the field without a plan, only looking for objects that seemed to be of value. The Italians used cheap labor, the majority of the time hiring people who had no skill in art or engineering. Sir William Hamilton described the process as slow and grueling, short on labor, and poorly excavated. In one instance, Hamilton noticed the “dilatory and slovenly manner in which they proceed in the researches at Herculaneum and Pompeii… they employ about 10 or 12 men only.”2 In addition to the techniques employed, the appreciation for classical antiquity was also called into question. Winckelmann, who observed the excavation process extensively in person, criticized Alcubierre’s incompetence as an archaeologist in his Letter and Report on the Discoveries at Herculaneum. In regards to Alcubierre’s care for the artifacts found, Winckelmann noted “without first recording the inscription, they ripped the letters from the wall, threw them all together into a basket.”3 By writing about these sites and antiquity found, Winckelmann and Hamilton paved the way for curiosity on the style and mediums that the ancient people used and thus a shift in archaeological purposes.

Archaeology in the early 18th century transformed from being purely political, to a scientific study of the past. The prince at Portici sought the marble objects because they were incredibly valuable, while King Charles VII was interested in only the objects that could easily be excavated to be placed in the royal museum and palace.4 In the early 1700’s, the engineers who recovered important pieces of antiquity purposely destroyed objects to prevent other people from getting them, as the objects were symbolic of a nation’s power.5

Though archaeology had occurred for centuries, the discoveries of Pompeii and Herculaneum initiated a new era in archaeology. Better tools were created to dig through ancient material, following the excavations by Alcubierre. The pick and shovel once used to dig at these sites are now supplemented by saws, and compressed air-drills, while skilled laborers, such as carpenters and bronze-castors are necessary to recover the unearthed paintings and mosaics.6 The changes in excavation techniques were parallel to the changes in archaeological purpose. A more thorough dig meant better preservation of the antiques, allowing Grand Tourists to view the objects and study them first hand. Instead of looking at art as objects for display, intellectuals began to look at antiquity through a different lens, analyzing the historical context and people who lived through the art.

4. Charlotte, Roberts, "Living with the Ancient Romans: Past and Present in Eighteenth-Century Encounters with Herculaneum and Pompeii." Huntington Library Quarterly 78, No. 1 (2015): 67, accessed March 19, 2017, https://0-muse.jhu.edu.luna.wellesley.edu/article/610794

← Fresco to Mosaic: Impact of Art on the 18th Century
The Founding and History of Pompeii until 79 AD →
Archaeology