Excavations of Pompeii in the 18th Century 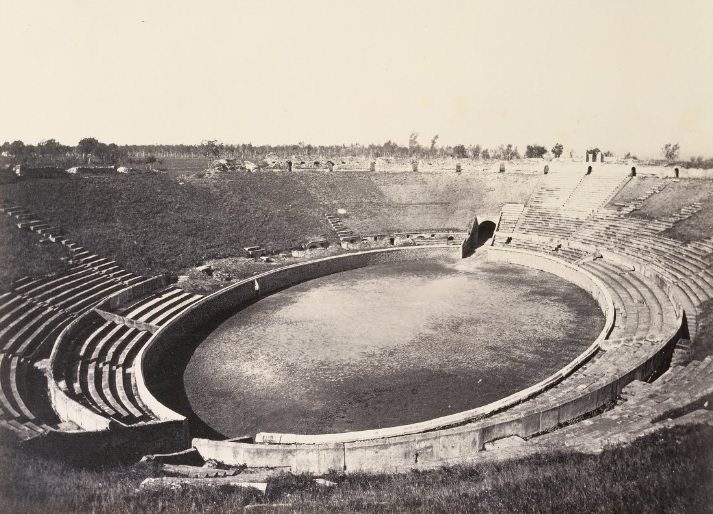 Photo of the Colosseum of Pompeii in 1860, which was originally discovered in the 18th century.14

In 1738, Charles VII gained control of southern Italy and established an autonomous monarchy.1 He encouraged artistic and cultural pursuits, and the fledgling field of archeology greatly benefited from this. Charles VII built a villa in Portici, and decided to continue the excavation work in the area begun by his predecessor, the Prince d’Elbeuf.2 Rocque Joaquin de Alcubierre, a military engineered, was charged with these excavations; Alcubierre used miners, soldiers and prisoners to dig next to the ancient walls.3 Initial excavations were dangerous, with the cramped tunnels, poor air circulation and the constant fear that a tunnel would collapse. Later tunnels would be backfilled after the removal of valuable objects and wall paintings.4 In 1748, Alcubierre concentrated his efforts in an area near Torre Annunziata , which locals called “La Cività”.5 Excavations from 1748 to 1750, underneath the area now known as the Amphitheatre, were initially discouraging.6 In 1755, excavations resumed, and the “Praedia” or estate of Julia Felix was the first building in Pompeii to be completely explored.7 Excavations during this period were not only sloppy, but often led to the destruction of objects and paintings not deemed worthy enough for Charles VII’s museum at Portici.8 While Charles attempted to keep the excavations a secret, the news traveled quickly. In an attempt to control what he saw as his possessions, Charles VII banned the export of antiquities in 1755, and visitors had to be first invited to see the excavations.9 While the drawing and writing about what they saw had been forbidden, this only forced highly inacurate works on Pompeii to be printed and purchased underground, and the inaccuracies in these drawings and writings manifested themselves in later works as well.10 In 1763, an inscription identifying “La Cività” as Pompeii had two important outcomes: (1) back-filling of the excavations was banned from this point on, and (2) the ruins were left exposed.11 In the 1760s and 1770s, there was a growing interest in preservation of Pompeii; it is even recorded that efforts were made to repair some of the ruins, as well as objects being to Pompeii.12 Following the political turmoil at the end of the 18th century, excavation work actually increased, even with the king’s departure from the area in both 1799 and 1806.13