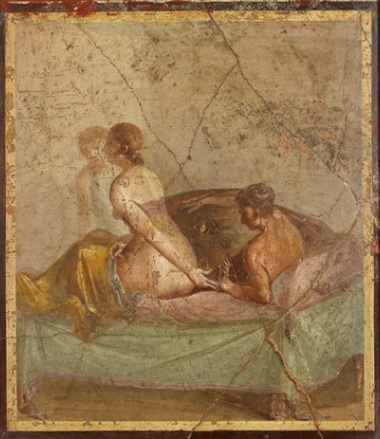 Within a discussion of the eighteenth century reaction to the discovery of Pompeii and Herculaneum in their book Pompeii, Erich Lessing and Antonio Varone write:

"What was coming to light was an entire urban fabric suddenly stopped in its track, unveiled in all its complexity to modern eyes. What was being unearthed was Antiquity itself, reveling in the slightest detail , and in its most intimate and secret aspects, all the nuances and multiple facets of a former way of life."1

In the eighteenth century, some of the first reactions to the objects at Pompeii were a mixture of curiosity and disappointment; they had not expected to see such mundane objects in Ancient Rome, which had been glorified through literature and painting for centuries. Nowhere could the difference between the ancient Romans and the eighteenth century aristocracy be seen more than the difference in attitudes toward sex. While the naked human form had been expressed in artistic representations of the eighteenth century, it was usually in the context of figure drawing or history painting, while the mosaics and wall paintings told a very different story, a story of the naked human form in action. The Ancient Romans were generally more open in their expressions of sex and sexuality, and this intimacy can be seen through the graffiti and paintings in Pompeii.2 Not only did Charles VII try to hide the excavations of Pompeii, but also some of the objects found, which were later put in a “Secret Cabinet” as part of the collection at the Royal Museum at Portici. Many of the objects hidden from public view were erotic or phallic in nature, including a statue of an erotic scene between a woman and her lover.3