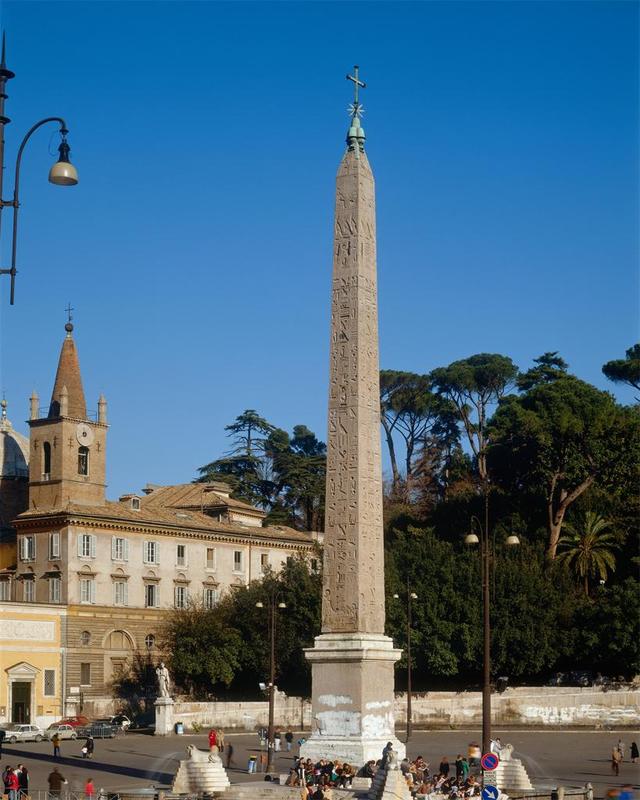 The Flaminian obelisk in the Piazza del Popolo 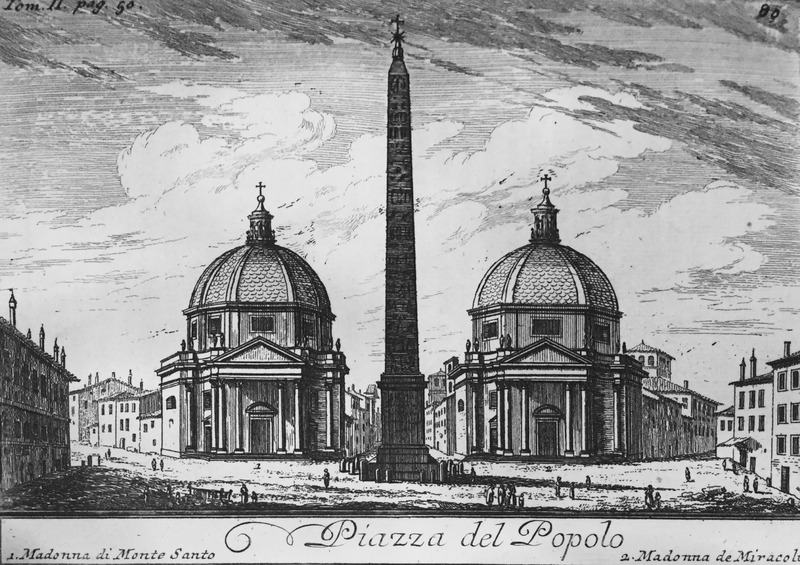 Etching of the Piazza del Popolo.

The Flaminian obelisk dates to New Kingdom Egypt (1550-1070 BCE) and the reign of pharaoh Seti I (r.1290-1279). It was originally placed in Heliopolis in around 1300 BCE, but had not been completed by the end of Seti’s lifetime, with only three out of four sides of the obelisk’s shaft inscribed with one column of hieroglyphs.1

The obelisk was eventually completed by Seti’s son and successor, Ramses II, who added two more columns of hieroglyphs to the shaft’s previously inscribed sides, and three columns of hieroglyphs to the unfinished side.2 On the pyramidion, Seti and Ramses both make an appearance in the form of sphinxes offering a figure of the goddess of truth, Maat, to the sun god, Re.

The Flaminian obelisk was the second of two early obelisks that Augustus ordered to be delivered to Rome in 10 BCE (the first was the Obelisk of Montecitorio). It was erected in the Circus Maximus, at the east end end of the spina, the barrier around which the racetrack turned.3 It is theorized that the obelisk’s proximity to the nearby Flaminian way is the origin of its title.4

Like its traveling companion, the Flaminian obelisk was also topped with a gilt-bronze sphere, and inscribed with identical commemorative text to the emperor Augustus’ conquests.

The Greek translation of the obelisk’s hieroglyphs, likely ordered by Augustus himself, bears little resemblance to the original text, however it frequently references the god Apollo, Augustus’ patron.5 This translation was perhaps a political action by Augustus in order to further legitimize his right to rule as emperor.6

Over the centuries, the obelisk fell and was buried, either due to natural causes or vandalism. It was not until 1568, under Pope Sixtus V (1521-90), that a comprehensive search and re-erection of the obelisk was undertaken.

After the removal of the damaged section of the obelisk’s shaft, and the reconstruction of Augustus’ inscription, the obelisk was raised in the Piazza del Popolo in 1589.7 Later, Pope Pius VI (1772-99) redesigned the square, adding a marble base and a fountain, decorated with Egyptian-style lions, to the obelisk.

The Flaminian obelisk remains in the Piazza del Popolo with this 18th century decoration to this day.

← Obelisk of Montecitorio
The Lateran Obelisk →
The Flaminian Obelisk