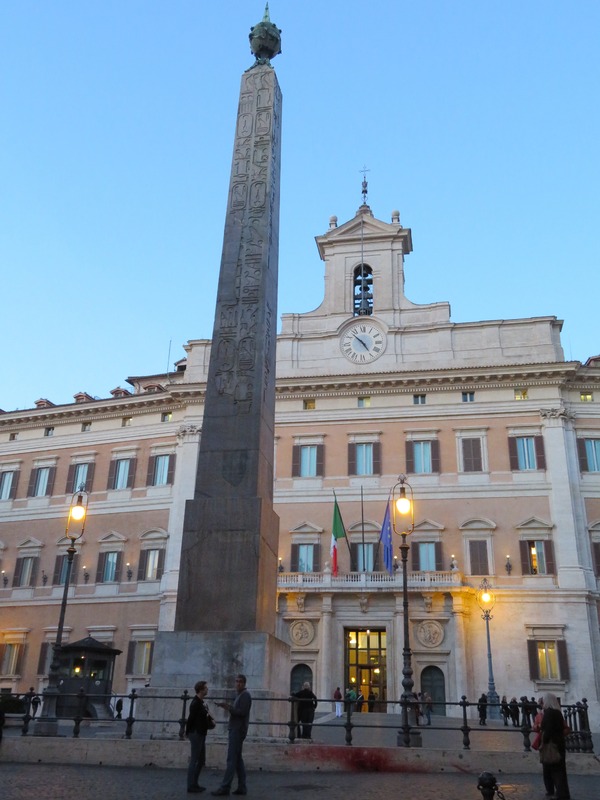 The Obelisk of Montecitorio.

An example of the obelisk functioning as the gnomon in the Solarium Augustae.

The Obelisk of Montecitorio dates back to the 26th Dynasty of Egypt (664-525 BCE), and the reign of Late Period king Psamtik II (594-589 BCE). There was moderate political turmoil during this period, with a struggle for control at Egypt’s Southern border.1

Despite these conflicts, however, Psamtik II’s kingdom was relatively prosperous. Upper and Lower Egypt, areas that had been divided until the reign of Psamtik II’s grandfather, Psamtik I, remained unified, and the dynasty was able to revitalize a number of structures throughout the kingdom.2

The obelisk, like many others of its time, was dedicated to the sun god. It was quarried in Aswan, and them moved to the capital, Heliopolis, where it was erected with a twin monument at the sanctuary of Re.3

Obelisks of Psamtik II’s time marked a revival in artistic form in Egypt, replicating styles of the Late Period kingly constructions from centuries before.4.

Nearly 600 years after its erection in Heliopolis, the Obelisk of Montecitorio would become one of the two early obelisks Emperor Augustus ordered to Rome in around 10 BCE. It was erected in the Campus Martius, topped with a gilt-bronze sphere, and inscribed with text commemorating Augustus's conquests in Egypt.5

In addition to the obelisk’s commemorative value, it held particular solar value as a dedication to Roman sun god, Sol. The monolith functioned as the gnomon, in the Solarium Augustae, a monument that served as a large sundial.

This monument, along with its traveling partner, the Flaminian obelisk, allowed Augustus to display his conquests, while also maintaining the its original solar interpretation.

There is little information on what caused the obelisk to fall after many centuries in the Campus Martius, however, scholar Erik Iversen, argues that the monument may have toppled during the Norman siege of Rome in the 11th century.6

Although others had known of the location of the toppled obelisk, it was not excavated and re-erected until 1792, under Pope Pius VI. The obelisk was relocated to the Piazza Montecitorio, where it received its title. Much of the structure was either missing or in disrepair, and the obelisk was heavily reconstructed, with missing areas filled with brick and then matched with rose granite from the column of Antoninus Pius7.

The obelisk remains in the piazza to this day, allowing viewers to view numerous histories within one structure.

← From Egypt to Rome: Moving Obelisks across the Mediterranean
The Flaminian Obelisk →
Obelisk of Montecitorio