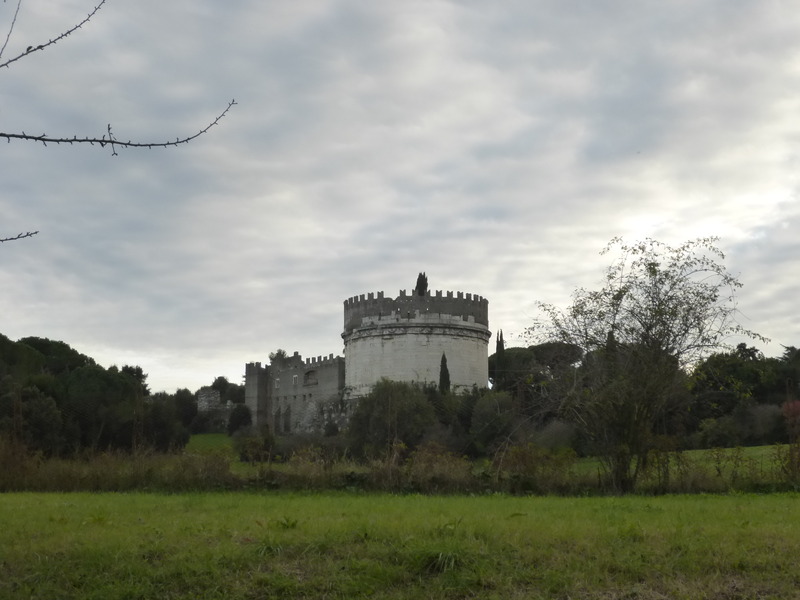 Tomb of Caecilia Metella, view from northeast side.

Starting sometime in the mid-fourth and third centuries, the designs of Roman tombs began their development into more monumental styles. According to James D. Sidaway, by the end of the second century, it was not unusual for tombs to be structures of substantial size and prominence in the urban landscape. By the first century (when the Tomb of Caecilia Metella was built) the number of large and unusually shaped tombs in the pan-Mediterranean area had increased dramatically, and each was vying for attention through their structural properties.1

This architectural trend towards more monumental and distinctly shaped tombs was likely the result of several factors, one of them being that the Romans had begun to perceive the dead with increased reverence and another being their growing attention to funerary rituals. Sidaway argues though, that the competitive and increasingly charged political atmosphere of the late Republic had a more significant effect on the architecture of tombs. Their external design presented yet another platform through which those vying for power could promote themselves and their families.2

The Roman elite were able to do this because funerary art held a rather ambiguous place in Roman culture. It straddled the line between the public and private spheres, and it was difficult for the state to put restrictions on their design. Politicians of the late Republic were thus able to curate the design of their tombs to facilitate their own political rhetoric. Tombs functioned as both a final resting place and memorial for the deceased as well as a controlled and specifically designed monument to promote the living.

Sidaway theorizes the Tomb of Caecilia Metella did exactly that for its commissioner, Marcus Licinius Crassus (RE 56), but in a subtle way so as not to upset the delicate balance of Roman politics after Caesar’s assassination.3 The Tomb promoted Crassus without being too obvious. It was highly visible and of monumental size and was decorated with symbols of his or his family members’ military achievements, yet it was humbly dedicated to his mother. The dedicatory inscription also brought just enough attention to Crassus’ elite status and his noble lineage through mother’s family, the Caecilii Meteli and his own, the Licinii Crassi.

Overall, though the Tomb is dedicated to Caecilia Metella, it is important to consider that her son likely commissioned the monument not only for memorialization of his mother but also for purposes of self-promotion.