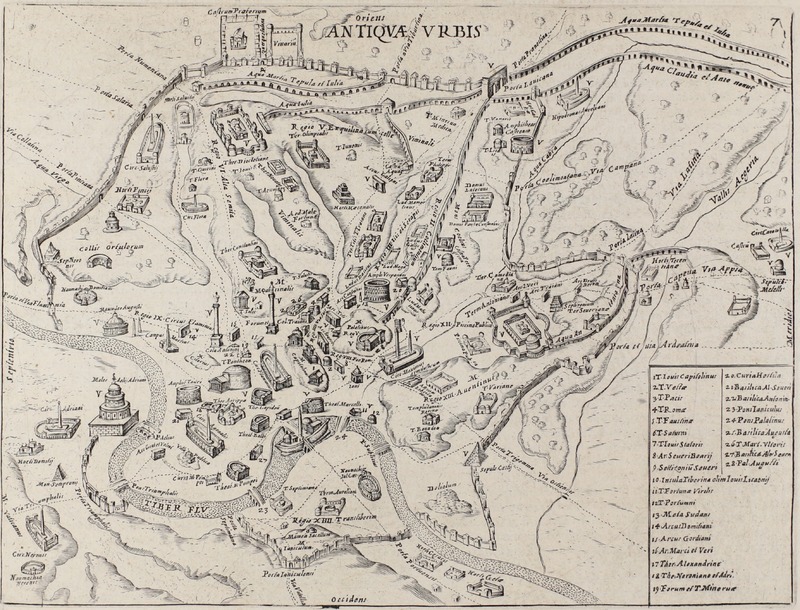 Giacomo Lauro's map depicting monuments and their locations in and around Rome.

The laws of the Twelve Tables did not allow for burials within the city walls, so the Tomb of Caecilia Metella was built three miles outside of Rome on the east side of Via Appia. Its location away from the populous city proved to be an advantage, as it allowed the monument to maximize its visibility in an open landscape, along a well-traveled road. Since its construction, the Tomb has dominated the surrounding area, dwarfing smaller tombs in the region.1 Aside from being enormous in size the Tomb also stands on the highest elevation possible, which is immediately adjacent to the paved road. Via Appia slopes downwards from its center, therefore buildings located closer to the road stand on higher foundations and present imposing facades not only to those standing directly in front of them but also to those standing farther away. Letters written by the well-known Roman philosopher and orator Cicero indicate that the Romans cared more about a high frequency of visitors and passerby than a beautiful setting when it came to deciding where and how to build their tombs.2 Clearly, the designers of the Tomb wanted the monument to have the most exposure possible and the fact that they cared so much about grandeur and prominence indicates that Caecilia Metella was definitely a woman of high social status.

Click here to learn about another monumental tomb, the Mausoleum of Hadrian.

← Date and Commission
Original Design and Layout →
Location and Visibility