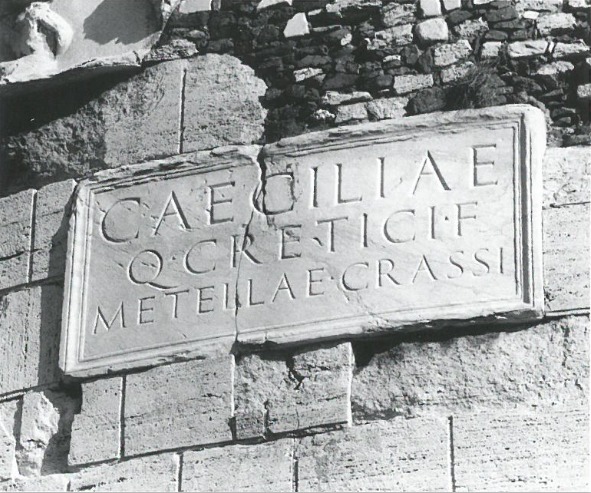 The dedicatory inscription of the Tomb of Caecilia Metella is featured prominently on the west side of the cylinder facing Via Appia. It reads:

which can be translated to: “To Caecilia Metella, daughter of Quintus Creticus and wife of Crassus.” The rectangular plaque that the inscription is carved on is made of a fine grained white stone, which has been identified as either Pentelic marble1 or pavonazzetto, also known as Phrygian marble.2 The lettering is in the style of scriptura monumentalis which was used in inscriptions during the early part of the Augustan age and the punctuation marks between words are upward-pointing triangles which were common during the late Republic.3

The inscription for the Tomb is surprisingly short compared to those of other monuments (see Arch For Septimius Severus and Column for Trajan). Though it does not offer any information regarding the commissioner of the monument or give much historical context at all, the inscription does indicate who the monument is dedicated to, and provides some biographical detail in terms of who Caecilia Metella’s father and husband could have been. The distinct styles of the lettering and punctuation marks also provide indirect clues as to when the monument was built.