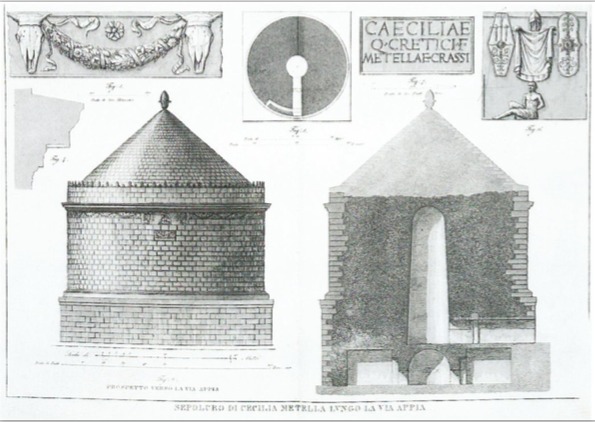 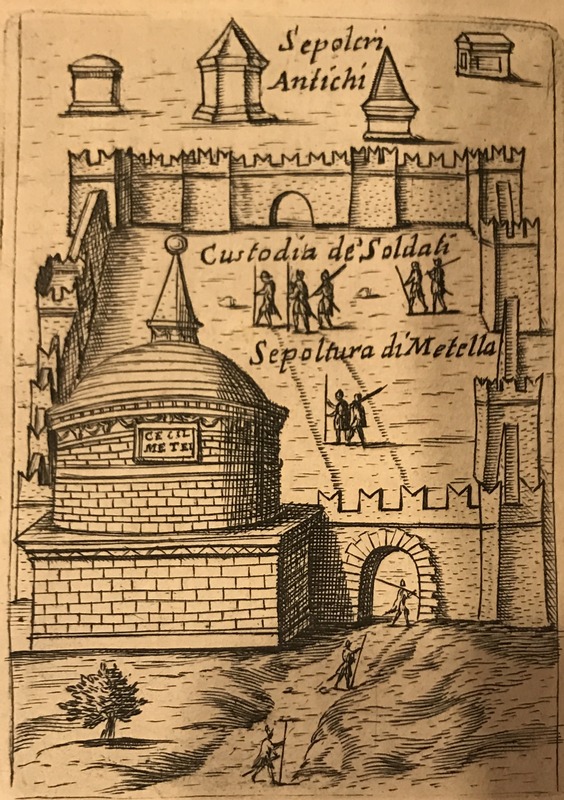 The original design of the Tomb of Caecilia Metella encompassed the square podium and cylindrical drum (or rotunda) that we still see today, along with a shallow conical dome and a ground-level entrance on the south side. Sometime between the 11th to 14th century, the conical dome was replaced by a crenellated brick wall and a castle was attached to the Tomb as well, resulting in what is more or less the current layout of the site.1 For more information on this architectural transformation click here.

The rotunda measures about 100 Roman feet (RF) (around 29.64 m), in diameter, and the square podium is approximately 100 RF by 100 RF,2 meaning that the curved walls of the rotunda would have just met the four edges of the podium at each of their midpoints. The rotunda and podium were made mostly from structura caementicia, or concrete, and were completely covered with travertine blocks. Today, the rotunda maintains most of its original facade, though the podium has lost a significant portion of its revetment, leaving its rough concrete core exposed.

A decorative frieze of Pentelic marble spans almost the entire circumference of the upper rotunda and depicts bucrania, or ox skulls, and floral garlands. Just above the inscription block on the west side, the frieze is interrupted by a relief panel of which only a small fragment remains. The fragment shows a military trophy surrounded by bound prisoners.

The core of the rotunda and podium is mostly solid save for a wide cella at its center that measures 30 RF (around 6.6 m) in diameter and tapers as it rises.3 The very top of the cella opens up to let in air and light from above, though scholars are unsure whether or not this opening existed in the original construction.4 A narrow passage connects the cella with the entrance on the south and directly below that passage lies a mortuary chamber that scholars suspect was where Caecilia Metella's cremated remains were originally placed.5