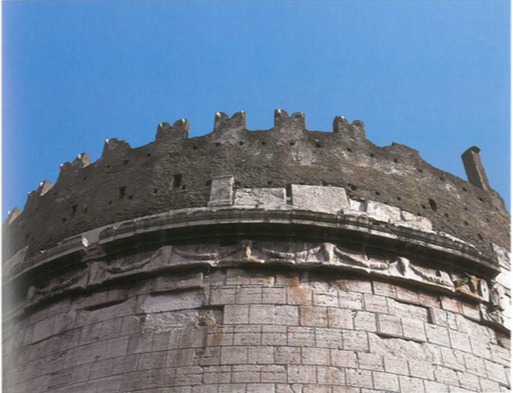 Tomb of Caecilia Metella, frieze depicting bucrania and and garlands.

Tomb of Caecilia Metella, fragment of tropaion and artistic rendering.

A frieze of alternating bucrania (ox skulls) and garlands of fruit runs along the upper section of the rotunda and is framed by two raised horizontal bands. The entire structure is carved on the Pentelic marble in high relief. The pairing of the two decorative elements, bucrania and garlands, became a popular motif for funerary monuments during the 1st century BC when the Tomb was built.1 This trend most likely originated from Etruscan funerary urns dating from the previous century that sported the same design combination.2 Additionally , according to A. E. Napp’s classification, the ox skulls on the Tomb of Caecilia Metella belong to the “Nacktschädel” category of bucrania because they depict the naked skeletal cranium without any skin.3 Nacktschädel gained a funerary and sacrificial connotation during the 1st century BC as well.4

A fragment of a figural relief interrupts the frieze on its west side, just above the monument’s inscription. The third of the original relief that remains today depicts a cross-shaped stand adorned with a draped fabric. The stand carries a helmet flanked by two decorated shields. Below the stand are the remnants of a bare-chested male figure sitting with his hands bound behind his back. As indicated earlier, this fragment is part of a larger tropaion, which likely commemorated a military victory. Scholars have attempted to characterize the iconography and ornamentation of the two shields as Gallic, Germanic, Macedonian, or Thracian to determine which military victory the tropaion is referring to, but have not come to a consensus.5 It is clear though that the military victory had to have belonged to one of Caecilia Metella’s relatives. Even so, scholars are not sure whether the tropaion refers to a single victory by one relative or multiple victories by multiple relatives.6 Without the other two-thirds of the relief to refer to, it is difficult to make any definitive conclusions about the tropaion’s original composition and historical context at all.